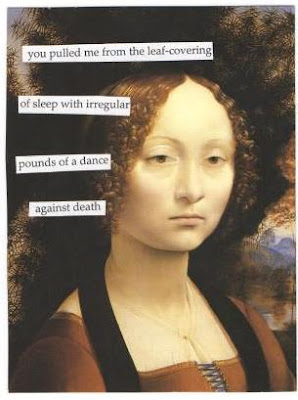 This was another magnet/sticker we created to pay for SoMM printing.  We (myself and my SoMM co-creators, Caroline Wesley, Meagan Snyder, Amy Egerdeen and Eftyhia Lucas) used to just glue lines of poetry and other writing that our genius friends wrote on simple collages or just plain prints of famous art works.

These lines are from an incredible prose-poem/letter by my sister, Emmy Anglin, that was featured in SoMM.  My sister is one of the most talented writers in the world!  This poem was inspired by a period in which she was living in the first floor of this kind of bone-chilling house in a really creepy neighbourhood (near skeleton park!) of Kingston, Ontario in the dead of winter.  She was doing her PhD at the time (which she has since finished!  Hurray!) and there was a single guy living in the apartment above her. This guy worked in a kitchen and would arrive home from work every night at around 4am and would blast techno music, and he would pull her "from the leaf-covering of sleep with irregular pounds of a dance against death", at which point Emmy would get out her ceiling-prodding broom, and he would turn it down, and the next night they would do it all over again.


Opposing futures fight each other in my mind, extinction against hope.  I'm sorry your cat went pee-pee on you when he got out at 5:00 a.m. and you had to corner and grab him outside my window, but you shouldn't have gotten him declawed.  Then he could safely go outside.  Enough of my philosophies.  You seem like a kind-hearted person, and I almost loved you in the breeze of what felt like the earth's last heavenly afternoon (a post-script, a nostalgic favour), when I dozed in my chair over my book, the door open, the shadows pressing their epigraph against the gold of street and grass.  I heard your voice drift from the window above; you sang "Blowin' in the Wind" with such sincerity that I almost loved you.  But then I remembered the night before, when you pulled me from the leaf-covering of sleep with the irregular pounds of a dance against death.  The only shades in the house were the frail insights that hang invisible in the light but radiant as skeletons in the half-dark.  Please give me back the illusion that our days are different, that they end with sleep and start again. We need new chances.  Please, Ryan, or one of us will somehow have to go.


Have a good day.