White Tears is the latest offering from author Hari Kunzru, who specializes
in “translit” -- a literary genre that seeks to collapse space and time while
maintaining narrative traction in the reader’s mind. Kunzru accomplishes
this so masterfully in White Tears that you will gladly surrender to his
ever-shifting reality. 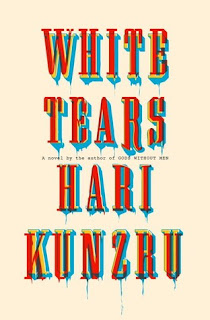 Seth, our protagonist, is average in every way and therefore serves as a blank
screen on which other characters are crisply projected. The achingly cool (and
ultra rich) Carter Wallace is the focus of his attention, and takes him on the
coat-tail ride of his life to New York, where they become music producers.

Through Carter, we enter a world of record collectors: mostly white men who
are alienated by the present, and obsessively collect the past. The rarest and
most prized treasures are early blues records made by black slaves, ex-slaves
or descendants of slaves. It is not enough for Carter to listen to the music -- he
wants to own it, by any means necessary. He becomes increasingly unhinged
as he hunts down one record, the extremely rare and groundbreaking Graveyard
Blues by mythologized figure Charlie Shaw -- one we are not sure even exists.

When he at last gets his hands on it, the universe of the novel is flipped upside
down. Reality disintegrates and space, time, and sanity become fluid and shifting.
The book gains dizzying momentum, and you’ll find yourself devouring pages to
find what happens next. Kunzru shows how seemingly innocent acts of appropriation
are echoes of the total forms of violence they descend from. The collector’s desire to
own black music springs from the same well that fueled slavery. In the world of White
Tears, however, the would-be possessors come to be possessed themselves by the
ghosts of retribution. Dark secrets materialise, and the final pages sew everything
together neatly like an intricate quilt, as interlocking and systematic as oppression itself.

White Tears is an entrancing, fast-paced mystery full of twists and turns that feel at once revelatory and inevitable. But it is so much more than a great read -- it is a metaphysical examination of white privilege, cultural appropriation, and selfhood that in the end will leave you with the satisfying sense that justice has been served.
Posted by Ellie Anglin at 10:55 AM