For the 150th anniversary of Canada's colonialism, I have created a series of collages celebrating some of Canada's queer icons. They will be exhibited in the window of The Button Factory in Waterloo, Ontario for their Views 150 exhibition on June 23, 2017.

Here is the first one, honouring Jackie Shane. 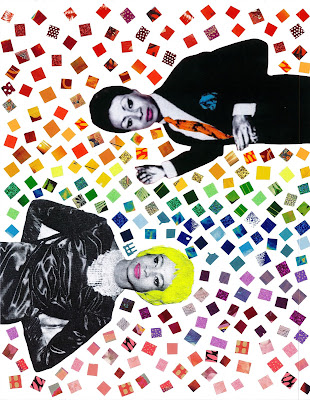 Jackie Shane is an American-Canadian rhythm and blues singer, best known for the 1962 single “Any Other Way”. Although male-identified during her active music career, in 2017 Shane came out as a trans woman.

Born in Nashville, Tennessee in 1940, Shane developed deep roots in the drag traditions of the Southern US Chitlin’ Circuit. At the age of 20 she moved to Montreal, where she was discovered by Frank Motley and his Motley Crew after performing a Ray Charles song at the Esquire Showbar in a bright red dress. Thereafter she became the band’s lead vocalist, and they re-located to Toronto, performing regularly throughout the ‘60s at Toronto’s historic Sapphire Tavern.

Shane’s recording of “Any Other Way” was noted for its double meaning of the lyric “tell her that I’m happy/ tell her that I’m gay” and was the first instance of a song containing an allusion to homosexuality reaching the mainstream. It became a chart hit, reaching #2 on Toronto’s CHUM Chart in 1962. In 1965 Shane appeared on Nashville’s Night Train, performing “Walking the Dog” in a sequined blouse.

CBC aired the documentary “I Got Mine: The Story of Jackie Shane” in 2010. In 2015 and 2016, the Polaris Music Prize shortlisted Jackie Shane Live as a nominee for its Heritage Award to honour classic Canadian albums. A two-disc compilation, slated for release in 2017, marks the first time since 1969 that Shane has been directly involved in the reissue of her music.

A 2017 anthology on the history of Canadian LGBT culture is titled Any Other Way: How Toronto Got Queer. The inclusion of Shane’s hit song in the title and an essay devoted specifically to her, is indicative of the incalculable and previously untold contributions she made to queer culture in Canada and the US. She currently resides in Nashville, Tennessee - the place where she was born.
Posted by Ellie Anglin at 6:03 PM