Queer Canada No 4 - The Brunswick Four

The approach of Canada 150 is the cause of much discomfort. It recognizes the Canada of white people and colonialism, and in effect ignores the First Nations, Metis and Inuit people that have been here for 15,000 years. This complicates the consideration of my own Canadian identity, but one thing remains constant - it is inextricably tied up in being queer. I kneel at the altar of what the queer imagination has created throughout history but I often look to the US and Europe to find my LGBTQ+ foremothers.

For the 150th anniversary of Canada's colonialism, I have created a series of collages celebrating some of Canada's queer icons. They will be exhibited in the window of The Button Factory in Waterloo, Ontario for their Views 150 exhibition on June 23, 2017. Throughout the collages I've used the traditional colours of the pride rainbow, as well as brown and black to represent the queer people of colour that have made Canada great.
Here is the fourth one, honouring The Brunswick Four. 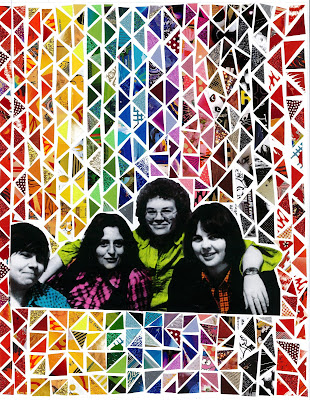 Four lesbians were involved in a historic incident in Toronto on January 5th 1974. On that night Adrienne Potts, Pat Murphy, Sue Wells and Heather Elizabeth performed the song “I Enjoy Being A Dyke” (a parody of “I Enjoy Being a Girl”) at an amateur night at the Brunswick Tavern, a working-class beer hall on Bloor Street. They refused to leave after being asked to by the bar owner, and were subsequently arrested. The women were physically and verbally assaulted by the police, and three were later tried in Ontario Court for obstruction of justice. Two of the women were acquitted, and one, Adrienne Potts, served three months’ probation.

Charges of assault by the police were laid after the women produced doctor’s notes and photos of their extensive bruises. Because the police officers exchanged hats and badge numbers, however, the women couldn’t accurately identify them. In response, the women refused to participate in the trial, calling it a sham and a miscarriage of justice. The women refused to rise despite several orders by the court clerk, and were charged with criminal contempt of court and led to the cells at Old City Hall. Potts and Elizabeth returned to court hours later to apologize but Murphy refused, earning 30 days in jail. The officers were acquitted.

The arrest of The Brunswick Four and subsequent trial was one of the first occasions that an LGBT+ topic received extensive coverage in the Canadian press. Gay historians believe it was a key incident that politicized the gay and lesbian liberation movement in Canada.