For the 150th anniversary of Canada's colonialism, I have created a series of collages celebrating some of Canada's queer icons. They will be exhibited in the window of The Button Factory in Waterloo, Ontario for their Views 150 exhibition on June 23, 2017.
Here is the second one, honouring Craig Russell. 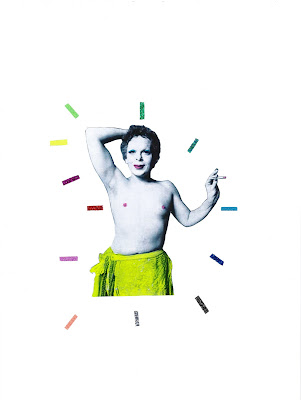 Craig Russell was a Canadian female impersonator and actor. Born in Toronto in 1948, Russell became president of Mae West’s fan club as a teenager, and briefly worked as her secretary in Los Angeles. Upon returning to Toronto he worked as a hairdresser while pursuing a career as a stage performer.

By the 1970s he had a burgeoning following as a performer in gay clubs throughout Canada, the US and Europe. While performing, he always spoke and sang in the voices of the celebrities he impersonated, including Carol Channing, Bette Davis, Mae West, Barbara Streisand, Tallulah Bankhead, Marlene Dietrich and Judy Garland.

In 1977 Russell starred in the film Outrageous!, based on a short story written by his roommate, Margaret Gibson. A decade later, he starred in the movie’s sequel Too Outrageous! A play entitled Margaret and Craig, based on the writing of Russell and Gibson is currently in development by writer David Solomon.

Although Russell publically identified as gay, he married his close friend Lori Jenkins in 1982. He remained married to Lori until his death in 1990 of a stroke related to complications from AIDS.